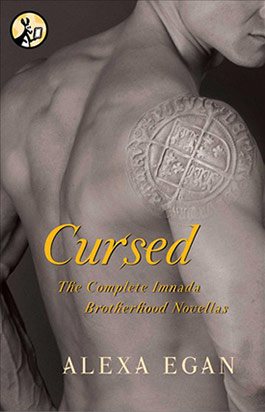 The complete collection of "not-to-be-missed" (Romantic Times) Imnada Brotherhood novellas—a dark and sexy series about a clan of shape-shifters living secretly as humans.

Awaken the Curse
University student James Farraday and professor’s daughter Katherine Lacey embark on a curse-ridden quest to find Katherine’s father, who vanished while studying a mysterious ancient obelisk. As they unravel the mystery, legends point to the existence of the Imnada, a race of shape-shifters said to have died off a thousand years ago. Or is the professor’s disappearance the result of a very human villain? Soon James and Kate’s search for the truth means fighting for their lives. Yet every hour they spend together exploring the past leads them to a very present and irresistible temptation…

Unleash the Curse
Neither actress Sarah Haye nor London’s most eligible bachelor, Sebastian Commin, the Earl of Deane has ever forgotten their scandalous night of white hot passion—and the differences that make a future together impossible. Yet they find themselves back together as they try to solve the mystery of a brutal attack on an Imnada shape-shifter and a sinister entity known as the Naxos. When the Naxos strike again, Sarah realizes she’s willing to risk a little scandal to save the world…and the man she loves.

Vanquish the Curse
Lady Estelle Swann didn’t come to London in search of a husband. Instead she’s here hunting for one of the magical Keys of Gylferion in hopes of preventing a war between Fey-blood and shape-shifter. So when the notorious scoundrel Lt. Jack Ramsay turns his dangerous charms her way, she’s more than a little suspicious. But he’s after something else—something that leads the couple on a mission both complicated and deadly. Soon Estelle and Jack find themselves fighting not only unseen enemies but their own very dangerous attraction.

“I have a proposal to lay before you, Lieutenant Ramsay. Are you interested in hearing what it is?”

“I have a feeling you’re going to tell me either way.”

“You can refuse and I’ll call the Watch.”

“I’m sorely tempted to let them have me,” he muttered. Then he leaned back against the bed frame, staring up into the ceiling. What mental accounts was he tallying in his head? “Go on,” he finally said with a tired sigh. “I’m listening.”

She allowed herself a small smile of success. So far. So good. “Very well. An object was stolen from me; one of great value. I need you to locate it and steal it back.”

He opened his eyes, the gold in them more pronounced than ever. They fairly glowed in the darkness. “Can’t you just call the Runners?”

“I prefer to keep things quiet for now. The less who know of the theft and the item, the better.”

“And what do I receive in payment for this service?”

“The necklace you tried to steal from me tonight. The Heart of Eros.”

His gaze flicked to the dressing table.

“Don’t bother looking. I’ve hidden it where you’ll never find it in a million years. But you bring me what I seek, and I’ll give you the diamond and ruby choker free and clear.”

Ramsay didn’t answer at once, and, as the moments stretched out, she tried not to show her impatience. “Do we have a deal?”

Estelle held her breath and crossed her fingers. “Her agents purchased it, but they did it on my behalf.” She arched a dignified brow. “A benefit for those of us handed life on a silver plate.”

“Five years,” he muttered. “Five bloody long years and now…” She could almost hear his teeth grinding as he shot daggers at her. “Very well. If you’re mad enough to part with the necklace, who am I to refuse a lady in distress?”

Estelle hadn’t realized she’d been holding her breath until he accepted and she let out a slump-shouldered sigh.

“Now, that we’re cohorts, care to untie me?” he growled.

For a heart-stopping moment, she regretted her impetuosity. This was no man to be trifled with, nor one who would be controlled by the mere promise of wealth. He was as feral as any of the Imnada who worshiped the moon and wore the shape of the beast.

“I may be a thief, but I’m not a murderer—yet,” he said as if reading her thoughts. “You’re safe.”

She crossed to kneel beside him. So close the heat of his body warmed her skin through her robe, and his breath fell soft against her cheek as she worked the knot loose. She hid the sudden trembling in her fingers with a firm yank on the end of the cord which fell loose to the floor.

Rubbing his wrist, he laughed. His deep molten baritone burned along her bloodstream. “And so our partnership begins.”

“I’m glad you came to see my way of thinking.”

He startled her by catching her chin in his free hand, his fingers strong and firm, his expression grim but not unkind. Her stomach fluttered and every nerve jumped under her skin. Was this crazy jumbled swirl of desire, fear, and excitement what the poets and dreamers styled love at first sight? If so, she wanted none of it. There was too much vulnerability in the tossing of her insides and the ache in her chest.

“If your usual method of attaining an agreement is a knock to the head, it’s no wonder you’re unmarried. No man wants to think the woman he pursues might be lethal.”

“Any man who pursues me will just have to enjoy living on the edge.”

He offered her another of those penetrating looks that lifted the hairs along her arms and crackled up her spine.
“Yes, I wager he would,” he said quietly, his words shivering along her skin like a caress.

Oh dear, what had she gotten herself into?