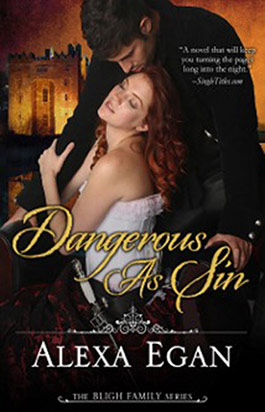 Behind the well-ordered Regency world of country balls and damped muslin lies the mysterious and dangerous world of the Other, mortals who carry the magical blood of the Fey. Not quite human, not quite faery, but something in between.

Morgan Bligh is not your average Regency debutante. She’s a trained warrior, a skilled tracker, and one of the half-human half-Fey Other. Given the task of hunting down a traitor whose dark magic threatens to raise an army of undead, she’s shocked to discover her partner is none other than battle-scarred Colonel Cameron Sinclair; a man who broke her heart once and threatens to do it again.

Wishing only to put the horrors of war behind him, Cam is appalled to find himself paired with a woman who not only despises him, but possesses a fighting ability to match his own and powers straight out of a faery story. Together they must fight to defeat a ruthless predator even as they fight their own growing attraction. Will this be their second chance? Or their last stand?

“DANGEROUS AS SIN is a heady blend of historical romance, deadly mystery and deep betrayals. Add to that, a dash of the paranormal and you have one heck of a book.”

“...With its well-drawn characters embarking on a journey of passion and danger, [Egan]’s latest will enthrall readers.”

“...[Egan] weaves history, magic and danger together with passion and desire to produce a novel that will keep you turning the pages long into the night."

“DANGEROUS AS SIN is an intense game of cat and mouse.”

“Readers will be totally captivated with this striking and highly intense story.”

“...This is one exciting read that will never leave you bored.”

“There are no wasted moments in this intriguing story, every detail draws you in and keeps you reading!”

“[Egan] writes a fast-paced, intriguing plotline which is full of twists and turns...”

~Once Upon a Romance

“[Egan] has penned a magical novel with DANGEROUS AS SIN.”

Cam stepped off the stair, everything about him gleaming. From his guinea-gold hair to the dazzling swath of braid across his uniformed chest to the champagne shine of his cavalry boots. Even the hilt of his dress sword twinkled in the lights from a thousand candles.

Admiration prompted Morgan to catch his eye. Impudence made her hold his gaze longer than proper.

Cam never batted an eye. A flicker of recognition, and then he moved on to be swallowed by the crowd.

Just as if they hadn’t been in bed together only hours earlier.

He’d gleamed then too. But then it had been the bronzed sheen of his muscled body, damp from lovemaking. The flash of white teeth as he rolled off her, laughing, before he pulled her against him. The spark of desire in his eyes as he took her once more into his arms.

She snapped her fan up and open, flapping it in a sad attempt to cool the heat just the memory of him created.

All around her, comments buzzed and swirled like a spriggan’s wind.

An elderly gentleman in conversation with two older matrons. “. . . heard he made quite a name for himself . . . ”

Three young bucks watching him with envious eyes. “. . . helps to have the Sinclair fortune behind you . . . ”

And the words that doused her flaming cheeks like a bucket of ice water spoken by an insipid, spinsterly woman amid a crowd of similar pinch-nosed females. “ . . . scandalous . . . say his wife’s a prisoner while he beds a string of mistresses . . . ”

Wife. The word screamed in her ears. Drowned out everything else.

Oh Gods, what had she done?

For the briefest of moments, Cam’s head surfaced, and he sought her out. Gave her a conspiratorial wink. Conspiratorial as in conspiring. Plotting. Conniving. Against a wife. A woman who until this moment, Morgan hadn’t even known existed. She forced herself to smile back even though it felt like her cheeks would crack.

“Pardon me,” she mumbled, diving back into the safety of the swarm of guests.

They obliged, curling back around her like an inrushing wave. Anonymous among so many in the ballroom. Although in this scandal of a dress, she doubted she’d remain anonymous for long. The fabric clung to every curve—hampering her usual ground-eating stride—and the smoky blue silk wasn’t exactly lost amid the sea of bland pastels. She’d worn it for Cam. Wanting him to see her as he thought she was. Elegant. Daring. Beautiful. But it had been just as much an illusion as his desire. His freedom.

They’d both been pretending.

She tore the combs from her hair as she went. Let the heavy fall mask her humiliation and her fury.

He followed. Not far behind. But the blinding attractiveness that had dazzled her hindered him. He was caught. Held. There was conversation. Introductions. His adoring admirers would keep him busy while she made her escape.

The terraces were quiet. The party hadn’t progressed this far yet. Flambeaus guttered and smoked. Lanterns bobbed in the trees on the lawn. But the benches were empty. The arches and summerhouse waiting.

A sweep of the gardens revealed the paths to the park beyond. And once there, she knew her way off the grounds. Had marked the routes as she entered. The professional at work, even then.

She rushed down the stairs. Pretended she didn’t hear Cam call out. Beg her to stop.

He called out once more. But by now, she’d concealed herself among the trees. Swift and silent as the wolf, she sped. The gown tore. She reached down, barely drawing breath, and ripped it farther up the side. Immediately, her stride lengthened.

But he was still too close. And a part of her ached to turn around and let him explain.

So she did the forbidden. She murmured the words. Felt the power shiver through her. And dropping the feth-fiada around her like a cloak, she vanished.