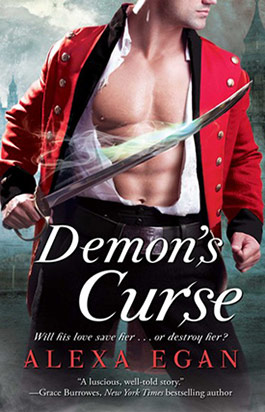 A rising star on the Covent Garden stage, Bianca Parrino believes she has everything she wants. Independence. Wealth. And a life finally free of her violent, abusive husband. But when her close friend, Adam, is murdered and Bianca is suspected in his death, she is unwittingly drawn into the search for his killer and soon must question everything she believes—about her friend, about herself, and about a world she never knew existed.

A member of the mysterious race of shape-shifting Imnada and part of an elite military unit, Captain Mac Flannery gathered intelligence during the Napoleonic wars. As a result of a savage massacre, Mac and the men he served with are cursed. Now one of them has been found murdered, and Mac suspects the existence of the Imnada has been discovered at last. His only link to unearthing the truth is the beautiful actress who turns up unexpectedly at Adam’s funeral.

Before long, Mac has more to contend with than Bianca’s overt mistrust, his ill-fated attraction to the haughty and beautiful actress, and his ongoing search for an end to the curse. Because Adam’s killer is back, and Mac is next on his list.

“Egan weaves a compellingly dark Regency world of shifters, fey, and passion. Taut with suspense and mystery, this new series is not to be missed!”

“Sexy shifters, ancient blood feuds, and a heroine who won’t quit her man make Demon’s Curse a must read.”

“A fast-paced and captivating debut.”

The call cut through her fear like a sword, but she didn’t move, afraid of what going to Mac would do to her already shaky resolve.

Why this crazy infatuation now, after so many years of remaining untouched and unaffected?

I know you can hear me.

Mac was brusque. He was arrogant. He was proud. But one slow quirk of that heart-stopping smile and her best intentions flew out the window. One moment of shared laughter or quiet conversation and she forgot why she was trying to avoid him.

I can’t say I’m sorry for kissing you, because I’m not. But I am sorry I frightened you.

She could ignore him and have his voice bouncing around in her aching head all night, or she could indulge him and get some sleep. Rising from bed, she drew a wrapper around herself before stepping across the passage to his bedchamber. She would stand firm. She would be as frigid as her nickname. She would keep the space of a room between them.

“Mac?” she whispered, lifting her stub of a candle to light her way.

Prepared this time, she barely flinched upon finding the panther lying on his side just beneath the open window. He lifted his head, his feral eyes gleaming with the reflected candlelight, though the expression in them was anything but savage. Instead, compassion burned brightly in his feline gaze.

“How did you know?” she asked.

I can’t sleep, either. She winced at the voice in her head. Not at the way it blossomed against her mind with the same clarity of the spoken word, but at the weakness threading the deep baritone. I never meant to frighten you.

“It wasn’t fear that drove me away this afternoon. Or rather, it wasn’t fear of you. It was fear of what you make me feel.”

For a terrifying moment, the ice queen melted into a real person.

The silence and the dark and the strange flickering shadows wrapped closely about her until she leaned against the bedpost, unable to leave as she’d intended. Her earlier fears and memories crowded around like restless spirits until the question spilled from her lips unbidden. “Do you ever feel the weight of your secret turning you into someone you’re not? Or worse, crushing the life right out of you?”

We have known no other way for uncounted generations. If it’s a burden, it’s one I no longer notice.

“Did Jory feel the burden? Is that what led to his marriage to Marianne? Just the simple joy in not hiding what he was or pretending?”

Mac didn’t answer right away. Instead, the great cat’s eyes focused on her face with a piercing intensity, his body still but for the gentle rise and fall of his ribs. Are you speaking about Jory or about you?

Her throat tightened. Her eyes stung with unshed tears.

She’d sought to put the horror from her mind, lock it away as she’d always done before, but she was unable to tonight. Instead, old and new mixed and merged into a blur of sickening images. Memories pushed loose from behind the walls she’d built until, without thinking, she dropped to her knees, a hand upon his shoulder, his fur thicker and softer than she had imagined.

Sobs tore at her stomach and hot, salty tears burned her cheeks.;She let them come, reveling in the loosening of the hard knot beneath her breast as she allowed Mac to glimpse her dark past.

He curled himself around her, one enormous paw upon her knee, his gentle strength a refuge. None could touch her while he held her thus. None would dare.

Do not weep, mi am’ryath. You did what you must to survive. We’re alike in that regard.

She’d prayed so often for Lawrence’s death, for an end to the torment of his step upon the stair, his hateful words, his heavy fist. But not by her hand. She’d never meant for it to end with violence. She’d only wanted him to stop hurting her. To leave her alone.

Her hands unconsciously curled into Mac’s fur, her tears falling upon his face as grief spiked painful and bitter against her heart. “Can you change back? Can you be . . . be Mac? I need . . . I need arms around me right now. I need to know this will turn out right.”

Gods, Bianca. If I could do this for you, I would in half a heartbeat. But I cannot. This, you see, is my curse.