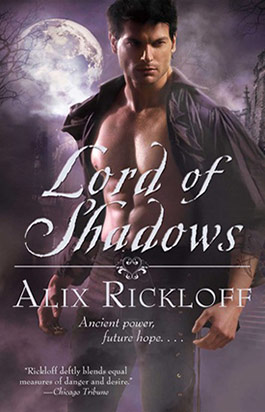 The Heirs of Kilronan trilogy follows one family’s struggle to stop a madman from resurrecting King Arthur as part of a plot to instigate a war between Other and Mortal.

Was it her murdered father? Her fugitive brother? It has been seven years since Lady Sabrina Douglas cloistered herself with the Sisters of High Danu, but the questions remain. She is Other—a mixture of Fey and mortal—quietly using her powers to heal. That is, until she saves a half-drowned man, his soldier’s body a roadmap of scars, his fathomless eyes filled with heartbreaking loneliness. The inexplicable connection overwhelms her defenses, touching her heart, mind . . . and body.

A man with no memory, Daigh MacLir seeks his past, even as unknown threats fill him with monstrous rage and inhuman abilities. But as a desperate game of hunter and hunted is played out from ballrooms to bedrooms, what Daigh discovers is more chilling than anyone could possibly imagine. Defying death was only the first step in the task he has been set, and Sabrina his last hope. But dare he risk involving her? Daigh has been summoned to find an ancient king, and even the powers of love may not be enough to win the battle against the powers of darkness.

“A complex and intriguing tale.”

“Fast-paced, intricate, and well-developed. A rich journey of self-discovery, passion, and intrigue, well worth reading time and again.”

“A paranormal fantasy well worth reading.”

“An engrossing story of good and evil.”

“Time to eat.” Juggling a tray while maneuvering open a door with her elbow, Sabrina backed her way into the still room. Luncheon was late today. A product of too many bandraoi spoiling the broth. Household magic was well and good, but an excess of mage energy in an enclosed space could make for chaos—as those assigned to the kitchens found when the stove began belching black smoke and the scullery sinks sent rivers of dirty dishwater spilling over the floors. “I apologize for the delay, but—”

Turning, she gasped, jiggling her tray ominously. Her patient was abed no longer. Nor was he comfortingly obscured by mountains of blankets. Instead he loomed above her like some titan from myth, his head scraping the low ceiling, his body seeming to fill every spare inch of room. Even air was at a premium. She couldn’t get enough to catch her breath.

She blinked, her gaze traveling over a bare muscled torso chiseled as granite, the accumulation of scars like some strange warrior’s language written upon his body in blood. But instead of wielding a battle-notched blade or an infantryman’s musket, he held only a shirt.

“Up here,” came an amused growl.

Heat rushed to her face as she lifted her gaze to his, the view only staggering her anew. Not handsome in the classical sense. No, his visage held too much toughness to be considered good-looking. All rugged angles and strong lines, a clenched jaw hewn from stone. Straight, firm mouth. Hair cropped unfashionably short and close to the head. And always that devouring black stare stripping her down to an awkward girl.

“Dress-ing. As you see.” Spread his hands, the shirt clasped on one great fist.

Had she really said that? Had she really looked . . . Oh, if only the floor would open and swallow her whole. Her entire body flamed with humiliation. A bandraoi did not go about ogling men. Not even if the man in question was exquisite ogling material.

He eased the tray from her before she dropped it. Placed it on the bench. Drew the shirt over his head, snapping her out of her daze.

She wiped her damp hands down her apron. Shifted under his enigmatic stare. “I best be getting back. Sister Ainnir will—”
“Stay.” A request that sounded very much like a command.

“Stay with me. Please.” His eyes pleaded with her as if he were drowning and she held his only lifeline. “Sabrina.”

With his fluid lilting voice, her name on his tongue rolled and rippled like water. Sent a shivery rush straight to her center.

“Your Sister Ainnir doesn’t talk, she glowers. Ard-siúr asks questions but provides no answers.” He plowed a hand through his dark hair. Exhaled a heavy sigh. “I need to learn what brought me here. Who I am. That’s impossible closeted in this monk’s cell.”

He held his fear close, but flashes of it speared her consciousness. Punched through her strongest defenses until she sensed his dread. Understood his panic. Her mind reeled with untamed emotion. It hammered behind her eyes. Kinked the muscles at the base of her neck. Never had anyone affected her in such a dramatic fashion. Bursting into her consciousness like a tidal wave.

Did he know what effect he caused? Or was his invasion unintentional?

She forced herself to relax. Clasping her hands in a posture of patience, she focused on locking her mind more firmly against his intrusion. It worked. Somewhat. At least she could breathe again. But the sensation of being caught and buffeted in the rip curl of his thoughts and feelings lingered.

“I’ll help if I can, but there’s not much to tell. One of the village children discovered you washed up in the shallows.” There. She’d managed two complete sentences without stammering like a child. “It’s an odd sort of cove. The current brings all sorts of things into the rocks there. Old timbers, broken barrels washed off ships. Bodies or what’s left of them.” Catching her gaffe, she stuttered to a halt. Just when she found herself easing into normalcy, she stepped right in her own words.

His gaze flickered and went still. A hand fisted at his side.

“I can take you there if you’d like.” She heard the words. Looked around in surprise as if someone else had just suggested a lonely trek to the cove. Was she mad? The last thing she needed was to be alone with this man who made her feel as if she’d been turned inside out, upside down, and back to front.

He didn’t answer until she wondered if he’d even heard her. Perhaps she hadn’t spoken aloud after all. Perhaps she was saved from her own foolish impulses. Uncomfortable with his continuing brooding silence, she filled it with the first thought that popped in her head. “You speak Welsh.”

“I do?” An excited glimmer brightened his dark gaze.

Her pulse sped up, but she met his eyes with a sheepish smile. “You did last night in your sleep. Just a few words. Nothing that made sense.”

“You kept this from me.” The accusation implicit. “What else have you learned?”

Tipping her chin in a determined show of reserve, she ignored the drumming of her heart. “You mentioned a diary.”

His brows drew together in a scowl of concentration. “A diary? What did I say?”

“You were asking for it. Demanding it. Does that mean anything to you?”

He closed his eyes, breathing deeply. His effort to make sense of the riddle she’d presented almost tangible. When he opened them again, tension shivered off him. Stirred the air like a storm charge. “I have sensations. Impressions. But no memories. Not about a diary. Not about anything. My mind’s empty of the past.”

“Except for the woman,” she reminded him, “The one in your dream.”

His gaze narrowed on her with renewed determination. “It was your face. I must know you. I just can’t remember from where. But it’s you. Of that, I’m certain.”

Impossible. She’d know if she’d met this devastating giant of a man whose mage energy radiated like an electrical storm. Men like him didn’t visit the bandraoi. And she’d not traveled farther from Glenlorgan than Cork in the last three years.

“Do they imagine women they’ve never met? I don’t believe it could be so, Sabrina.” Her name like a caress.

Butterflies threatened to explode out her stomach. Smoothing her apron, she cleared her throat with nursely efficiency. “I best be getting back to my duties.” Patted his shoulder like she might a child, though the masculine frame beneath her fingers was decidedly un-childlike, and she was certain he felt her trembling. “You were more dead than alive when the villagers brought you to us. It will take time for you to recover your memory, but I’m sure it will happen.”

He gazed down on his callused palm, the slash of old cuts evident even there. Closing his fist, he shrugged. “You’ve seen my scars,” he replied, hunching his shoulders as if warding off a blow. “Perhaps it’s best if I don’t.”