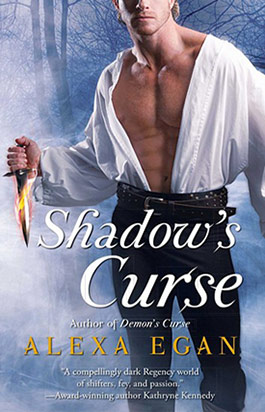 Can desire’s magic defeat the powers of darkness?

Forced by her half-brother to use her dark gift of necromancy for profit, lovely Callista Hawthorne is determined to flee to her one chance for safety, her aunt in Scotland. With no hope of success unless she finds help on the long road north, she offers cursed shape-changer David St. Leger an irresistible bargain.

David—one of the mysterious Imnada—stalks the night streets of Regency London as a large, black wolf. Renounced by his own kind, he spends his desperate rage on thieves and murderers. While Callista offers him escape from the terrible enchantment binding him, agreeing to her terms will force him into the treacherous world of the half-Fey Other, his clan’s ancient foes.

Drawn together by danger, David and Callista find passion in each other’s arms. But can they foreswear the centuries of enmity separating their two races, and find a love they dare not even imagine?

“Intrigue, politics, and unexpected romance in Egan’s captivating series. If you haven’t read her yet, now’s the time to start.”

The shirtsleeves stretched only as far as David’s forearms and the boots pinched his feet, but the breeches fit, and the three-caped greatcoat Miss Hawthorne had purloined from her brother’s closet was voluminous enough to hide any style faux pas as well as the death-on-a-stick pallor he was currently sporting. “What do you think?”

He ran a preening hand down his shirtfront.“That bad?”

“Absolutely horrid.” She sobered. “Are you certain you can’t just...you know . . . change? It might make our escape easier.”

“The word is shift, and no I can’t.” He inhaled his first comfortable breath since she’d cut his bonds. Not a deep breath yet—his lungs still ached too much for that—but since breathing at all was a minor miracle, he’d not complain. “No worries, Fey-blood. I’m not completely without resources.”

Clearly unamused, Callista pursed her lips and gripped the handle of her satchel as if she might swing it at his head.

“We made a bargain,” he said, placing his hands on her shoulders, forcing her to look up at him. “Trust me.”

Drawn to her eyes, he found himself focused on the strange shimmering intensity he saw there, an almost hypnotic sweep of storm clouds flickering across her gaze. The longer he looked, the more dizziness set the room around him swaying. But instead of narrowing, his vision expanded until felt as if he might walk directly into her mind. Images flashed in front of him: a woman kneeling, her hair falling to shield her face, a man’s broad form rising behind her, a dagger clenched in his bloody fist.

David dragged a horrified breath from his lungs, bowels cramping in terror.

“Trust you? I’ve heard that line before,” Callista said quietly. “Forgive me if I remain skeptical.”

She blinked, long black lashes sweeping down over the rose of her skin, and his odd lightheadedness receded. Even so, he kept his hands upon her shoulders a moment longer, just to reassure himself he wouldn’t fall over when he let go and undermine all his encouraging words.

They had been this close only once before, during the time she took to cut his bonds. Or should he say, Callista had only allowed herself to get this close to him that one instance. Since then, she’d maintained a civil but definite distance. But now, he felt the warmth—and the tension—of her body where his fingers rested. He noted the soft roundness of her cheeks and the fullness of her coral lips, but there were also deep smudges beneath her eyes and a tightness to her mouth. Whatever experiences pushed her to seek his help also hardened her expression to wary suspicion and made her seem older than her years. But for that one small half-smile, quickly snuffed, he’d have said she was incapable of anything less than a scowl.

He took her skepticism as a personal challenge. The doubt he saw in her face made him want to prove himself. But it was the dimple at the edge of her lips and the clean linen scent of her hair that drove him to kiss her.

That or he was a whole lot woozier than he thought.

As kisses go, it was less than spectacular. In fact, it was a bloody great failure. Instead of melting against him, eyes fluttering closed in sweet surrender, she went rigid as a tent pole, shock in her gaze, lips pressed tight. The farce ended when she jammed her bag up between them, catching him a blow to the ribs with one brass-reinforced corner.

He stumbled backward with a gasp and a curse.

“That is not part of our bargain,” she said, fairly quivering with rage.

“So I surmised,” he wheezed as he rubbed his chest. “What do you carry in that damned bag? A pair of anvils?”

She merely tightened her arms around the valise. “If you’re ready, we should go.”

“Fine, but this long trip to Scotland just became a hell of a lot longer.”

She eyed him with another of those world-weary stares that, for some reason, made his chest bunch with a strange, unexpected ache. “Agreed,” was all she said before she turned away.