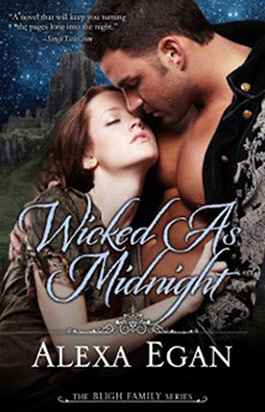 Behind the well-ordered Regency world of country balls and damped muslin lies the mysterious and dangerous world of the Other, mortals who carry the magical blood of the Fey. Not quite human, not quite faery, but something in between.

Conor Bligh is part of a brotherhood sworn to guard the divide between the Fey and mortal worlds. When the demon, Asher escapes from his eternal prison, the task of capturing him falls to Conor. When Asher murders Conor’s sister, it becomes his obsession.

Ellery Reskeen is the bastard daughter of an army captain determined to outrun her unsavory origin and forge a new respectable life. Until a dead man shows up on her doorstep.

Conor needs Ellery’s body to return Asher to his prison before the demon destroys both worlds. But that was before he met her. Now, can he put aside duty and revenge, or will the demon claim another woman he loves?

“[Egan] presents a fascinating debut filled with sensory details and a deep sense of lore.”

“[Egan]'s debut sweeps readers into a dark, dangerous and sensual realm where legend and passion mix to perfection to create a compelling, original love story."

~PW Beyond the Book Blog

Ellery touched him. Placed a hesitant hand on his arm. “Don’t.”

“Don’t look that way. Your eyes go bright, but the warmth is gone. It’s you—but not you.”

He grabbed her. Held her in a vise-like grip until she flinched. “That’s just it.” His words sharp and violent. “There is no warmth, Ellery. There’s nothing. I’m Other. I’m Heller. And I’m Amhas-draoi. Any one of those things separately should make you think twice. All three and you should be afraid for your life.” He released her. Flung her away so that she stumbled back.

She straightened, rubbing her bruised arms. “Why are you saying these things?”

He advanced on her. Stood so that he loomed dangerously over her. “Because I need you to understand that whatever fantasies you’ve been spinning about us are way off the mark. There is no us. There never was.”

The stricken look in her face would have been heartbreaking. If he’d had a heart. It just made him angrier. More determined to put as much distance as he could between them. For her sake as well as his.

Her eyes flashed. Her chin came up. “I don’t believe you.”

“That’s a good question. I don’t know what your game is.”

Ignoring his glowering stance, she stepped closer. The heat off her skin staggered him. And her scent—that musky exotic spice she wore—was intoxicating. She caught his face in her hands. Rose on tip-toe to brush her lips against his. She wove a spell with her body that smashed through his defenses like a battering ram. Molded herself so close he felt the hard pearls of her nipples through the thin cotton of her gown.

Why wasn’t she running? Gods, was the woman insane? Didn’t she know what he was? Didn’t she care? He groaned against the temptation to rub his rock-hard shaft against the v between her legs.

“Tell me you don’t want me right now,” she whispered, her tongue flicking out to taste him.

He closed his eyes. Inhaled a ragged breath. He couldn’t push her away. Not when she asked for it with that sultry sex-me voice. When he could smell the wet, hot center of her. That left him only one choice.

He reached within. Unchained the darkest part of him. Let it rise to the surface. Take him over. Howling its release, the beast clawed its way through him. Sank its fangs into his soul. Ate away everything human and left only the cold-blooded Fey behind.

Muscles hardened. Blood pumped hot and hungry through his veins. His gaze narrowed to a pinprick. Focused on her. He grabbed her off her feet. Held her so that he saw the reflection of his clear gold gaze in her frightened eyes.

Behind him, he heard the horses screaming. Banging against their stalls in mindless panic. They were right to be scared.

“You once said you didn’t fear the Heller in me,” he snarled.

He dropped her so that her legs buckled. She scrambled back against the stall where the bay plunged and reared.

“Well, you should, Ellery. You should be very afraid.”